Project Roo (Prototype)
​Unity 3D — PC
January 2020 - March 2020
Team of 3
Project Roo is a proof-of-concept prototype of a first-person, action-adventure shooter with mobility and speed at its core. In Project Roo, you control an agile bounty hunter who can run and jump on walls. With an arsenal in your pocket, the endless ranks of evil you face don't stand a chance.

Project Roo was inspired by Doom (2016), Titanfall 2, and Destiny 2 and features a parkour-style character controller. Its UI and level design was inspired in part by Metroid: Prime and Doom (2016).

As technical designer on Project Roo, I was responsible for implementing many of the core gameplay mechanics. I implemented the parkour character controller, scriptable weapon pipeline, combat mechanics (shooting, health, damage, etc.), weapon animations, a playtest telemetry script, and first-pass gameplay UI. Once created, I also maintained and extended the code base to allow other designers and programmers to modify the core behaviors to suit their needs.

The greatest challenge for this project was undoubtedly the character controller. The player needed to be able to run, jump, wall run, wall jump, and slide all seamlessly. In reality, the full effect of the Parkour Character Controller is achieved only by including its camera controller as well. In addition to basic look functionality, the camera controller also handles effects like dutching the camera when running along a wall.

Let's run down how the character controller works: 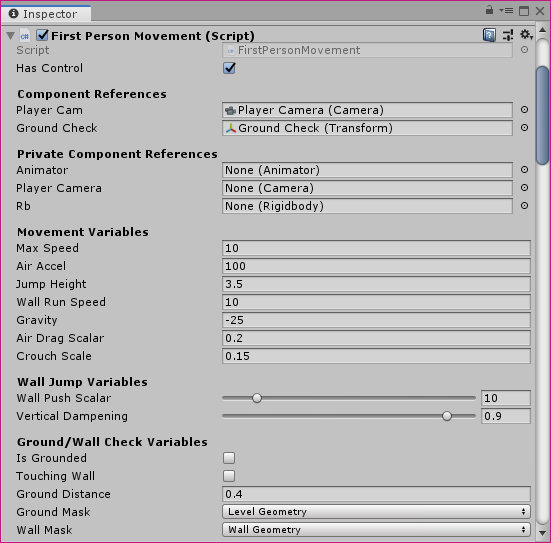