I have played loads of MMOs throughout my life, but something that has always annoyed me about some popular MMOs is vendor trash. Despite its disparaging name, vendor trash does serve a purpose in the many games you might encounter it in. In most games, it serves as a steady stream of game currency to reward players with for playing the game regardless of what they are doing. These items are typically generic, low-level equivalents of more sought after gear or unequipable, untradable items whose sole purpose is to be sold to an item vendor for a small amount of currency. Hence the name Vendor Trash.
In my latest MMO endeavor, Destiny 2, vendor trash takes the form of low rarity items that players receive as random drops from enemies or as a rewards for playing playlist activities. Thankfully, the white-rarity items (the lowest rarity in the game) aren't awarded outside of scripted new-player experiences. The lowest rarity item regularly rewarded in game are Rare (blue) items. In Destiny, blue items have a chance to drop at a higher Power level than what a player has in their inventory; however, this is only true if a player's overall Power level is below a certain threshold called the Powerful Cap. Above this level, only rewards from "Powerful" sources drop gear above the player's current level rendering random blue drops basically vendor trash. With the sole exception of a pair of Hunter gloves with the strange ability to drop with a unique stat spread, having to regularly dismantle Rare drops (or "blues" as we call them) manually gets tedious.
Since a player inventories in Destiny are relatively limited, blues can take up valuable space quickly and overflow into the Postmaster (Destiny's "Hey, you forgot this," and inventory overflow solution) if not dismantled with some regularity. There is no "dismantle all" or "mass dismantle" function in Destiny and no way to mark items for dismantling; everything must be broken down manually, one at a time.

In unrelated news, I recently discovered AutoHotkey, a specialized scripting language designed specifically for automating tasks on the desktop. I wonder if I could use it to solve my vendor trash problem...?

My first major hurdle in this project was detecting the rarity of an item in an inventory slot. While this might seem trivial at first, remember that AHK is not being used as a plugin or mod for Destiny 2 in this case; I do not have access to any information about the game state. I could have used the Bungie.net API to fetch the relevant inventory information before dismantling, but that has two main problems. In the end I decided it would be simpler to try to identify an item on screen rather than go through the API. Getting this to be reliable would prove to be challenging, but I was up for a challenge.
My method for identifying item rarity is simple. I inspect a single pixel from the screen and see if it's the right color. Ingenious, I know. Unfortunately, given my limitations this was about all I could do. If I were to release this script to a wider audience, I would jump through the hoops necessary to fetch the relevant item information via the Bungie.net API. For now, though, this would have to do.

My first step would be to figure out where in screen space inventory slots would appear and which pixel within each item frame I should sample. This first part of this step was soon plagued by a problem that I will talk about in more detail later, but finding which pixel to sample within an item frame was mercifully simple thanks to the UI/UX team at Bungie adhering to consistent design patterns.
Once I knew where to look, all that was left was for me to sample the correct area of each item's frame and see if it was blue. If it was, I could safely dismantle that item. If it wasn't, I could move on. While I was at it, I also took the time to sample the color of "Rare" rarity items while using different colorblind modes so that I could send this utility to my colorblind friends and not worry about accidentally dismantling something valuable of theirs. 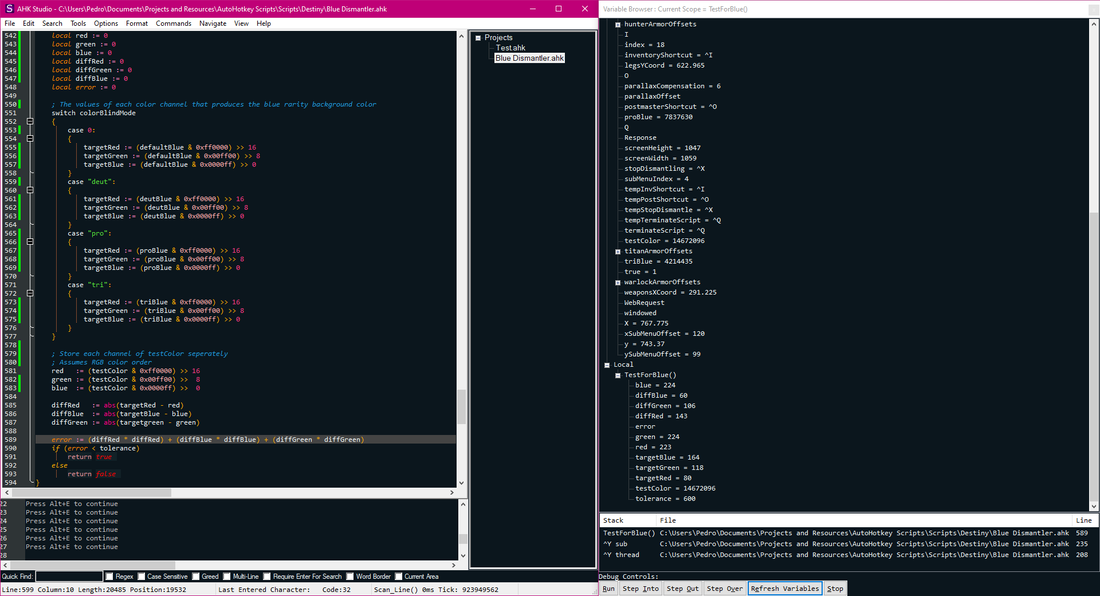 Now that I knew where within each item frame I could look, I could set my cursor on top of the currently equipped item in any slot and scan across that slot's sub menu in search of blues.
Once I sat back down, things got a lot better. The strange window resolution reporting comes from the way windows report their own resolution in Windows. The extra screen space comes from the navigation bar at the top of the window. Simple enough fix.
The parallax effect in the vertical direction is so subtle that I could basically ignore it. The mouse's position would vary by 3-4 pixels at the most, not nearly enough to put the mouse outside of an item frame. The parallax effect also seemed to scale along with screen size. The higher the resolution of the display, the more pixels the mouse would have to move before the UI shifted.
This left me with one issue to tackle: horizontal parallax. To measure the parallax effect, I created another script that moved the mouse cursor horizontally across the screen, measured how much item frames moved along the way, and dumped the results to a text file. Turns out, the parallax effect is (thankfully) linear. To compensate for this, I made a function that took in an x-coordinate in screen space and returned how much to offset the mouse cursor given its intended destination on screen.

With that beast conquered and my new parallax compensation function in tow, all I had left to do was describe the position of each item frame in item sub menus (the nine boxes that expand out from the currently equipped item in your inventory) relative to the equipped item frame. Lastly, I came up with a method of offsetting the cursor from the center of an item frame to reach the corners where I would be sampling pixels from. And with that, I could now place the cursor on any item icon in the player inventory screen and offset it to any corner of that box.

Plans for the Future and Known Issues

The script as it stands today is up on my GitHub page for download. AutoHotkey also has the ability to compile any script into an .exe alongside any supporting files like my config.ini and README.md.

Currently, the Blue Dismantler works entirely via shortcut commands and has no GUI at all. Since AHK has the ability to draw windows, I plan on creating a GUI mode that the script will launch in by default that allows users to change their config settings, restart the script, or initiate/cancel dismantling manually. I also plan on adding support for dismantling items in different menus like the Postmaster and Vault. Lastly, if enough people show interest in the tool, I'll likely rebuild it correctly so that it uses Bungie.net API calls to fetch item rarities instead of sampling pixels from the screen.

The script also has some bugs that come from abnormal screen resolutions and aspect ratios. Currently, the script makes cursor movements in screen space which is to say everything is offset from the top left corner of the window. For people using ultra-wide monitors, however, it is easier to offset the cursor from the center of the screen since Destiny's UI is centered in the screen at every resolution. Padding the horizontal resolution of the window only adds dead space to either side of the character menu. If I change this behavior in the future, I'll be looking for pixel density instead of window resolution to determine my offsets. Finally, Destiny has another UI/UX feature that highlights newly acquired items in your inventory periodically until you mouse over them for the first time. If this highlighting effect happens to coincide with a dismantling routine, my script sometimes misclassifies items and fails to dismantle them. This is another thing that the Bungie.net API workflow would resolve.

All in all, I'm happy with my little tool. I have added a few functions here and there such as the ability to only search specific parts of your inventory to avoid sweeping the full inventory unnecessarily, but the bulk of it remains unchanged. This little project taught me a lot about AHK and its potential, and I feel much better equipped to create quick and dirty automation tools for repetitive tasks anywhere on my computer. While I don't think I go about this project the same way I did the first time around, I'm content to have made something that works rather quickly, learned some new tricks along the way, and solved my vendor trash problem. A fun little project.